It seems like such a long time since the first failed trip, had to leave the boat in Mackay and had to return to work. By now I had hoped it would be close to home and I would have been able to do some maintenance and make some small changes to make her mine and to go weekend sailing. In July I took another two weeks leave from work and things were looking like it will all work out this time.

At least this time travelling north we only had the essentials and just a few extras to take on board.  Unlike the first trip when I had to hire a ute and take lots of tools, cabin and boat necessities, personal bits and pieces and a tender, this time we only needed to hire a medium sized car.

We arrived at the marina late on Friday night and headed onto the boat and settled down.  Sadly, the weather was much the same that forced us to leave her here the last time – wet and windy.   The next day we headed off to do a spot of provisioning and drop off the rental car.

As the weekend progressed the weather kept us in the marina but at least we got some of the planned chores done before heading off.  A look at the forecast and Tuesday looked like our window to get going south.  There is no fuel gauge on the boat, there is a sight tube up the side of the fuel tank.  Crawl into the engine space and lean across the motor, shine a torch against the tube and it is easy to see the level of fuel in the tank.  As I had filled up in Airlie Beach before the first attempt at sailing home the level was obvious and just an inch or so below the top – no need to fuel up on our way out.

Mackay marina – don’t let the blue skies fool you, it was very windy.

Monday night was a sleepless night for me, I tossed and turned all night. going through all the possible things that could go wrong.  I have never really had any anxiety issues or panic attacks before but this time it was real. I was feeling physically ill with worry so we put off our departure by another day – Wednesday.  Wednesday dawned with a beautiful calm day and we said – let’s go.  Motored out of the berth and out of the safety of the marina.

Just south of Mackay is a huge coal loading terminal and dozens of huge empty coal ships are anchored awaiting their turn to go in and take away what has been ripped from the Earth.  We continued to motor through them before setting sails and turning our nose towards our first anchorage – Curlew Island.  Winds were good and sailing was easy and we got to Curlew Island just before sunset. 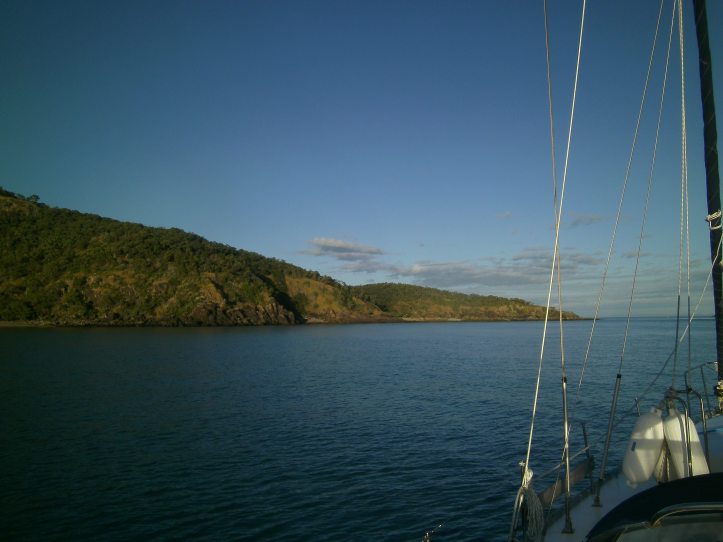 A calm night and then off the next morning east towards the Percy Islands group.  Winds were fair but they dropped off during the afternoon so it was put the sails away and motor the last part of the day.  Whales were playing in the distance and we were accompanied by dolphins playing on our bow for a short while.  The anchorage was a little crowded but we squeezed our way in and settled in for anchoring sundowners.

The next day we planned to spend on Middle Percy Island.  I had joined the Percy Island Yacht Club in order to help save the island and iconic A-frame so had to pick up my burgee.  Whilst there we were able to listen in on a weather forecast.  Strong wind warnings had been issued so we would have to shelter somewhere for another day or two.  Middle Percy Island isn’t protected in the SE’ly winds.  A check of the fuel situation and WTF!!! It’s only a few inches from the bottom.

Early next day it was a short motor over to the protection of South Percy Island.  Because I would have time I decided I’d empty and crawl into the cockpit locker that sits on top of the fuel tanks and find a way to dip the tank to check.  After much squeezing, twisting, bending and knuckle banging I found the top of the tank and there was no way to access the contents.  The fill point and breather were on the outside of the tank against the hull so they would only show me the shallowest part of the tank.  More panic, “we’ll run out of fuel at the most in-opportune time!!!” 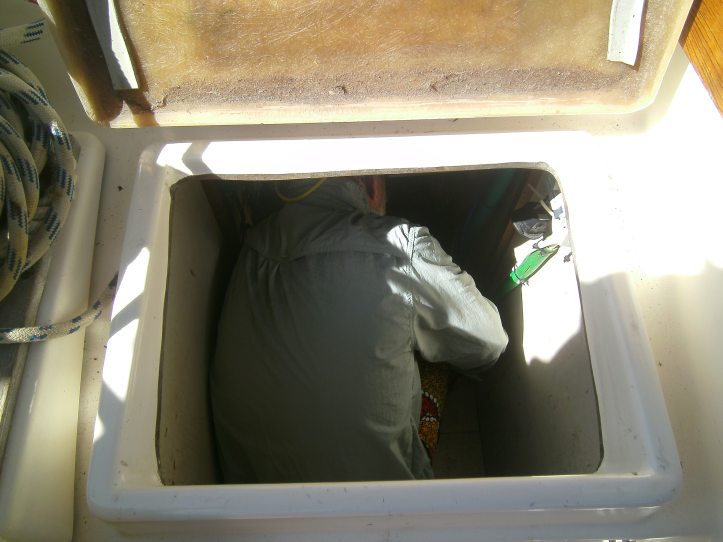 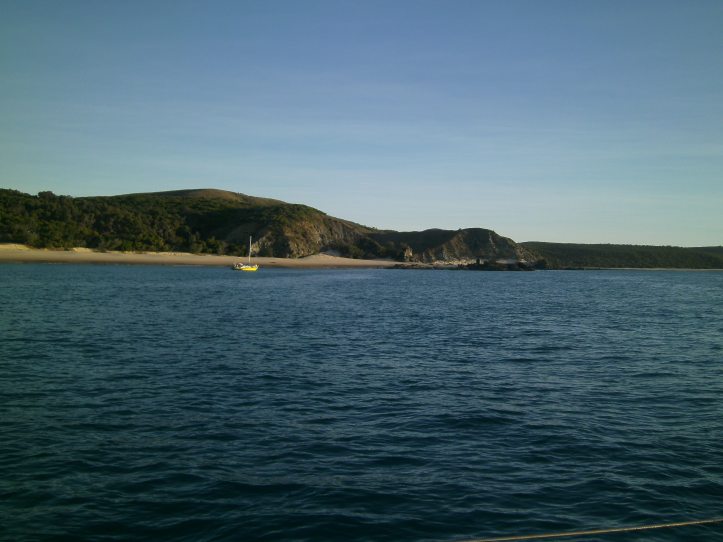 Two days waiting at anchor at South Percy and then things eased for a departure and heading off to our next anchorage – Hexham Island.  Like the previous day the winds were fresh during the morning but eased to almost calm during the afternoon.  A far cry from the wind warnings of the days As we tacked to head west towards Hexham Is we started to see a warship peep up over the horizon.  Operation Talisman Sabre was on and we’d heard some radio contact from warships to civilian boats during the day.  Obviously this warship had heard of our reputation and headed off away from us as we approached.  They didn’t want our bad luck to rub off on them.  Finally motored into Hexham just on sunset. 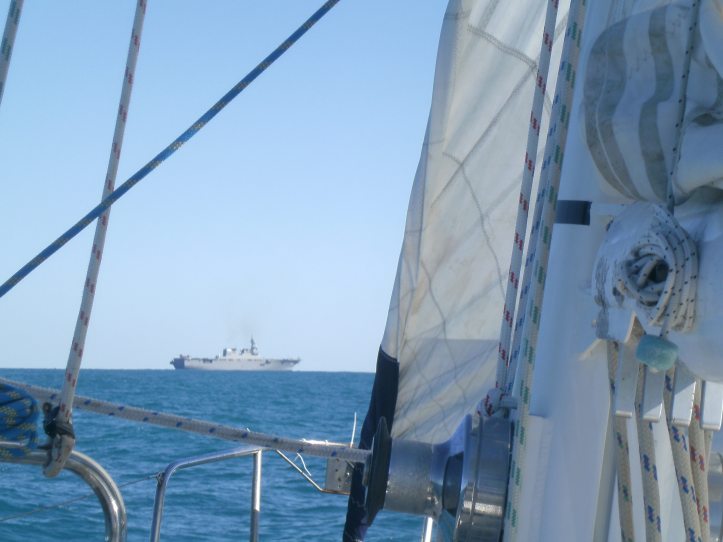 Even the USN got out of our way

Again the day started with fresh winds and chopped up seas as we motor sailed against a strong tidal current to round Hexham Island and head further south towards Pearl Bay.   And like the days preceding they winds eased during the day and on an occasion of trying to tack in fickle winds the headsail flogged against the spreader and – you guessed it – tore just along the edge of the sacrificial strip So it was furl the genoa and up with the staysail.   The combination of light winds, old sails and mounting frustration it was engine on and motor sail the last few hours to anchor in Pearl Bay.   But hey – I ad the number 2 genoa so in the calm of the anchorage it was off with the big genoa and up with #2.  All would be good to get home.  But the #2 genoa wouldn’t roll properly on the furler so it was off with the #2 and rehoist the staysail.

An early start off anchor in the dark.  Nav lights keep tripping off so it was leaving the anchorage with just the tricolour lights on the mast head to warn any other boats of our presence and direction.  Before heading off I checked the fuel and found the level to be higher than when we started form Mackay.  Now I was totally confused and worried we would run out somewhere.   Motor sailing with the trysail and old main it was noticeable that our port tack was much faster than on starboard.  This slowed our progress and motored toward Yeppoon as darkness fell. To make things even more challenging there was a large bushfire just north of Yeppoon and the thick smoke was held down by the cooling night air and drifted across the sea to further limit visibility.  Luckily we were heading almost due south so with such limited visibility ahead I was able to look to the Southern Cross and it’s Pointers and steer by the stars.  We finally dropped anchor in Cooee Bay and awaited the next day before heading into the marina.

A quick day in Yeppoon.  Fuelled up and checked into the marina.  Hired a car for a half day and went to restock some needed supplies – rum and beer mostly, some emergency nav lights and also got a couple of jerry cans just to be sure of not running out of fuel.    The marina office also supplied a contact for sail repairs and Andrew came to our rescue.  Despite how busy he was he came and picked up the sail, repaired it and had it back to us later the same day.  Put it back on the furler and headed out for dinner.

“Zulu Waterways” warns that Rosslyn Bay Marina can be shallow.  During the night a quick check of the instruments showed a depth of zero under the keel at low tide. We were sitting in the mud, so not going anywhere too quickly.  As daylight Saturday broke we left the marina and again turned south trying to make for Gladstone.  Heading south into the prevailing winds was always going to be a challenge and it was clear to see we wouldn’t make Gladstone in a day.  Again just on sunset we tucked in behind Cape Capricorn and anchored for a rolly night.

Sunday morning dawned cloudy, windy with showers. Off anchor in darkness before sunrise and with full fuel and not really wanting to try and tack into the winds we decided to motor all the way to Gladstone.   The weather stayed cloudy wet and windy for some time but did improve slightly as we motored south.  The highlight of the motoring was a close encounter of the whale kind.  Michelle had to take evasive action to miss one that surfaced right ahead of us and we passed within feet of each other.  Michelle rang ahead and we were able to get a marina berth arriving late Sunday afternoon. No way was I getting to work tomorrow morning so it was settled in and make plans for tomorrow.   Tidied up the boat and organised another hire car to get home.

So that’s where she is now, sitting lonely in Gladstone marina waiting for the next opportunity to bring here the last leg of the journey home.   At least now it is only a weekend sail away from getting home.

Twin of the Skies and Shell of the Seas, welcome within for some tales, or whatever you please!

A redhead, her husband, and rescue dog... buying and fixing sailboat a to sail around the world!